What's The Difference Between Brandy and Cognac, As Well As Few More Fun Facts 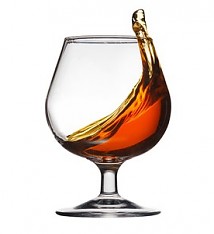 People often asked me the difference between Brandy, Cognac and Grappa. All three can be considered cousins as they are produced in the same way, but from different parts of the grapes and then by adding 35-60 percent alcohol to the distilled liquid.

Cognac , which is considered a type of brandy, is made from doubly distilling white wine from the designated area in France called Cognac. If the grapes are not produced in this area, then it cannot be considered Cognac

Another cousin of Brandy is Grappa. It is an Italian alcohol that is made by distilling the pomace, which are the solid seeds and skins of the grapes.

A grape brandy tends to be more elegant and fruity that Grappa, which by nature is more intense and structured.

Two more distinctive cousins of brandy are Armagnac and Calvados. Armagnac is a distinctive kind of brandy produced in the Armagnac region in Gascony, France. It is distilled from a blend of grapes usually including Colombard, Folle Blanche, Ugni and traditionally using column stills and oak aged before release. Armagnac was one of the first areas to distil spirits, but since the volume is so much smaller than Cognac it is less well known outside of Europe. It is considered to be less smooth, but to have a deeper more sophisticated taste on the palate.

Calvados is an apple brandy from the Normandy region of France. It can be served as an aperitif and is also often served between courses in a long meal in France with a bit of apple or pear sorbet to “reawaken the appetite”. Calvados is less-aged than its cousins and the flavors of apple or pear should be fresh and prominent. The longer it is aged, the more it will resemble brandy and Cognac in bouquet and flavor.

There are many different options to try so next time you are out and thinking about having a Cognac, step out of your comfort zone and try something new!